♥ Katie Porter posted this on Twitter just now: “We’ve been charging oil and gas companies the same royalty rate to drill on public lands for 100+ years—until yesterday. The Biden Administration has raised the rate to the amount I’ve been pushing for, which means taxpayers will finally get a fair return on these public assets.”

♥ The White House says it’s restoring parts of the National Environmental Policy Act that force construction projects to consider their climate and environmental impacts. Trump had weakened its implementation in 2020. (So much of the mighty effort the Biden Administration has to make is righting the wrongs Trump and his minion did to the country. The DOJ investigation into Jan 6 events is, by itself, massive. So much work that would have been unnecessary if Trump had not been in the White House.)

♥ From Brian Karem on Twitter: “More than 400 suspected Russian spies who were posing as diplomats have been kicked out of Russian embassies across 20 European countries.”

♥ Steven Greenhouse, the New York Times’ labor reporter, just tweeted this: “In a huge embarrassment to Starbucks’ anti-union campaign, the union won at 5 of 5 Starbux in Richmond where votes were counted today: 17-1, 22-3, 11-2, 13-8, 19-0 The union has won at 25 of 27 Starbux where votes were counted Workers at >200 Starbux are seeking union elections.”

♥ Below is a list of convicted Republican pedophiles. You can squint and read it but you probably won’t get too far, given that your innards will rebel. Why is this a good thing? It emphasizes and gives specifics to my perceptions about the current madness infecting the Republican party. 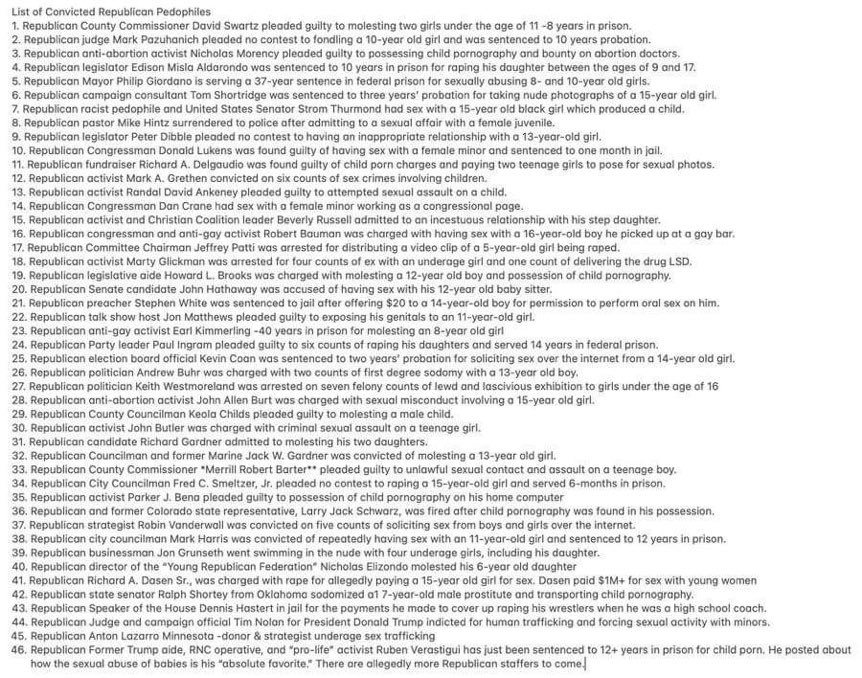