Animal news: I’m in love with a documentary series from BritBox 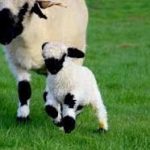 It’s called “This Farming Life.” And over the past week, it’s been my great escape from American reality.

See that photo up there? (You’d better notice because I’m still so inept at planting photos in here, I struggled for almost a half hour just because you have to see this little character.) That little guy is called a Valais blacknose lamb. He is of a breed known, pretty accurately, as the cutest sheep in the world. You can’t quite see it in this picture but their little black noses are flat and pug-like, not snouty. And I’ve been watching them being born.

BritBox, I am so grateful for your documentary series on the lives of farmers in one of my favorite places on earth — the north of Scotland (and, as a bonus, Northern Ireland). I’ve been a safe, clean, dry and warm companion to a small number of muddy, wet, cold, exhausted farmers in those regions. They raise, variously, cows, bulls, sheep, goats, pigs, Shetland ponies (in the Shetland Islands, where else did you think?). Chickens, too.

The land on which each of these individual farmers herd their animals is gloriously beautiful, heavily weather-ridden. So the sweeping vistas are awesome but what I love the best is the births of the babies. A pygmy goat who is having trouble birthing twins has to undergo an emergency Caesarean. I was a bit concerned because we didn’t see the vet giving her an anesthetic but she wasn’t yelping so I guess she was OK.

The farmer who recently ventured into those relatively rare blacknose sheep (they shear them; the wool is valuable) had to hand-raise one baby who was orphaned. The baby follows the farmer around right at his heel like a dog. Indeed, because of their looks, you’d think the lamb was one of his sheepdogs trotting alongside.

Since thick burrs are not always immediately comprehensible, throughout two or three segments I thought the lamb was a boy named Alfie. Then one day, when Alfie disappeared for a short time, I realized she was a girl named Elfie.

Oh and there are prize cows — one farmer kisses his cows on their wet noses — and a gigantic 25 ton bull whose name I’ve forgotten who required a bit of plastic surgery on a (very large) ankle growth. How, you are asking, does a vet operate on the foot of an animal who towers above him? It’s really something: the bull is walked into a cage-like structure which is rotated until he’s lying down.

I’m learning SO much about farm life. Did you know cows can get TB? If a farm has cows with TB, the animals all must be destroyed and the farm can’t do any cow business until they get cleared by multiple tests.

Some farmers cry when their animals are sold for…well, food. I cry, too.

I am utterly enamored with this show. I get to sit comfortably in my chair and vicariously experience the mud — everyone wears Wellies — and getting up at 3 am to chase a pregnant ewe around a hilly field.

Farmers can be funny, too. One man who has been raising black water buffalo and who intends to expand into producing Scottish mozzarella has bought a herd of Dutch cows for the purpose. As they trot out of the van that brought them, he says, “Hello, girls. Welcome to Scotland.”

I could go on but instead I’ll let you find this series on BritBox. Only enter it if you need the escape because once you get in, you will never want to leave.