Animal news: The weird story of some shaggy dogs

The Akita. That’s the dog.

Here’s a sketch of an Akita from the American Kennel Club’s website: 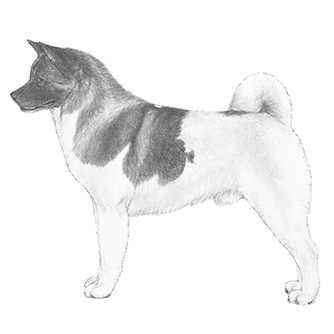 My introduction to the actual animal came when I ran into one on the Village sidewalk. It did not look like any other dog I’d seen anywhere. Maybe it was a mixed breed. I evaluated it for a few seconds, then asked its owner what it was.

“An Akita,” he said with a certain pride. A Japanese breed, he said. We chatted for a minute or two. The dog did not move one muscle during this time. It gazed at me without menace, without warmth, without coldth. Nothing. More indifferent than indifference. He could have been a large stuffed toy. Except maybe he blinked a couple of time. Maybe.

Most proud dog owners want to show you how marvelous their dogs are, how friendly and loveable. I was not encouraged to pet his dog. The owner told me the Akita had been bred to be a one-guy sort of guy, although the dog didn’t exhibit any more interest in his owner than he did in me. So even if you had a large enough lap, this was not going to be your lap dog.

So odd. A dog you couldn’t engage fully with. But, luckily for the curious being I am, what had recently opened on the corner of Perry Street and Bleecker? An Akita shop. Which is where the dog’s proud owner had gotten his.

Now, before we get to the shop, I need to point out this was a period long before throngs of exotica like Affenpinschers and Bouviers des Flandres and a bewildering variety of sheep dogs from foreign parts could be seen on any sidewalk and dog park. That is, the fad for dogs bred, I am certain, to boggle the uninitiated mind had not yet taken hold in New York.

The Akita was my first breed boggle. Moreover, except for the Akita, I don’t recall that a single breed had its own shop anywhere in the city. Ever.

OK, since we’ve gotten that straight, let’s go into the Akita emporium.

It was a fairly large shop for Bleecker Street. (Its previous merchandise was Spanish Colonial furniture.) Unlike pet stores, it did not have those cages (which always make me wince) along the walls. The only enclosure I recall was a large playpen for the puppies.

The puppies were, naturally, adorable. No puppy on this earth, no baby animal, could be not awww-some, except maybe baby poisonous creatures like scorpions. But baby Akitas were active little fluffballs.

After hanging over the fluffballs for a few minutes while making the requisite noises, I talked to the shop’s manager, from whom I learned the Akita was an ancient Japanese temple dog. Guarded the temples. Was a symbol of good luck. Was not a family-type of dog; yes, the Akita was a one-man dog. His distinctive feature was his tail, which curled up over his back.

A more distinctive feature was the price. At that time, an Akita pup was around $1600; in today’s dollars, it’d be around $5000. Or maybe more. Because the thing is, have you seen an Akita lately?

I haven’t. After my first sighting and my visit to the shop, the streets of New York were flooded with impassive Akitas; they were all over the place, all with those curled tails and painfully lumpy walks — Akitas, like many highly bred large dogs, were subject to hip dysplasia. But after less than a decade, the Akita shop closed and the population…petered out.

The strangest thing. They were everywhere, and then nowhere.

On my elevator one day a few years ago, I saw a dog. Unlike all other dogs encountered in our elevators, this dog did not acknowledge my presence. Accustomed as I am to labros and doodles and all sorts of mixes, I asked the dog’s owner what mix it was.

“It’s an Akita,” he said. I was startled. But oh yes that tail was sort of curled over the dog’s back, if not as tightly as the Akita tails of memory.

Haven’t seen that one or another Akita since. Perhaps it was a mirage.