I’d read news of the Belgium-Netherlands border conundrum due to a vagrant river, but got what’s below from Kevin Underhill, at Lowering the Bar.

Several things to note about this sanguine conflict resolution:

In November, Belgium and the Netherlands signed a treaty in which they agreed to exchange less than 50 acres of land along the border. The border is the Meuse River, but changes in the river’s course over the years has left two pieces of Belgium on the east side and one piece of the Netherlands on the west. (Those are the “wrong” sides.) Nobody lived on any of these pieces, but authorities said they became a “haven” for shady people and practices because the relevant law-enforcement officers had to cross the river. Warfare was not required to make this border change, but it has apparently taken about six years to work out the detail.

I picked up the above story a few days ago but have been dilatory in posting it, for which we all get a bonus: look what I just found on Twitter: another peaceful border story! Although given that it’s between these two states, one must ask: will the people who found themselves in North Carolina be able to vote?

16 people who went to sleep on December 31 as South Carolinians woke up as North Carolinians on January 1. #GPS http://www.thestate.com/news/politics-government/article124010139.html … 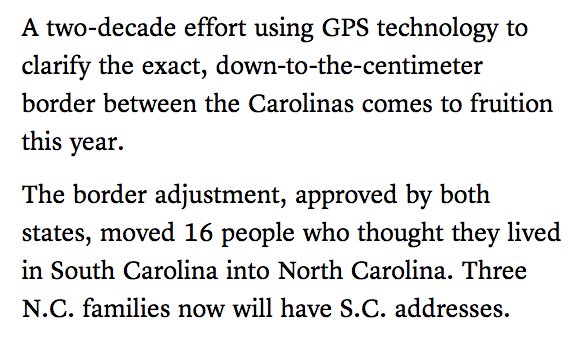 This entry was posted in The Facts of Life and tagged border disputes. Bookmark the permalink.