I’m late opening Sidebar today so what a surprise! Numerous readers have heard that the Carnegie Deli is closing (see link above to the Daily News story). So numerous people searched on “Carnegie Deli,” and wound up on Sidebar getting posts on the long-running divorce, etc. cases involving the owner(s) of the Carnegie.

Which I’m not going to link here. (If you’re desperate to read all about it, and it certainly is titillating, you can search for “Carnegie Deli” on the search space, upper right.)

Mostly, I’m sad because, although I’ve haven’t been to the Carnegie in a long time (you know, we get older, we’ve had cancer, we learn how to spell “cholesterol,” blah blah blah), I will miss falling off my chair every single time my order–always a tongue sandwich–is plunked down in front of me and once again I am astounded at how MASSIVE HUGE BIG it is.

I have had the same reaction every time I’ve clamped myself into a car on the Cyclone at Coney Island and, as it slowly, slowly crept up that first steep incline, thought to myself, “Hey, this isn’t so bad.” Until it rolled around that curve way at the top and I looked out at the Atlantic Ocean and then turned to face directly down at that drop and screamed, “HOW THE HELL DID I FORGET THIS AND WHY THE HELL AM I–” 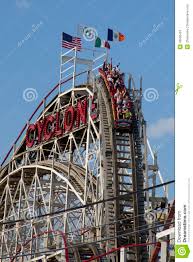 Two fearsome New York staples of life, soon to be reduced to one.

Twitter was full of photographs of deli meat and melancholy posts: “How’s a Jew like me supposed to suffer a heart attack at age 37 in this city anymore?!” And “It’s pastrami on cry.”

Tweet
This entry was posted in Law, suits and order and tagged divorce lawsuits. Bookmark the permalink.