Fake news versus real news in a dictatorship: upsidedownism and samisdat in the U.S. of A.

How peculiarly upside down things are.

As I was commenting on the scary Charlie Warzel interview with a games designer,I kept thinking about samisdat. I kept reading and typing and thinking, “What the hell?”

Trump calls our free press, our credible journalism, “Fake,” and people who believe that and enter into bizarre conspiracies about the “deep state” are rolling around in crazy fake “news” in the underground cavern provided by the internet and social media.

So, why are we upside down and what is samisdat?

It is a Russian composite word meaning “self-publication.” But samisdat is not the equivalent of publishing one’s own work on Amazon. Samisdat is clandestine and dissident self-publication, necessary in a tyrannical form of government which controls the news (and other) media.

During the primacy of the post-Stalinist Soviet Union, typewriters, printers and copiers were numbered and watched by the State, i.e., the KGB.

I now recall a long non-fiction article I read years ago in a literary journal. The author, an American, had gotten permission to do research on a particular subject in the Soviet Union. He worked in a big library. Whenever he needed to copy a document, he had to apply to use one, and had to enter a small room where the copier was, where he’d encounter a sort of Copier Commissar, a hostile elderly woman who guarded the copier and who watched him hawkishly as he made his copies.

So, for Soviet intelligentsia — political dissidents, artists, writers, poets, i.e., anyone who had something to present which would have been censored or banned if an effort were made to go through official channels — the only way to express themselves publicly was through samisdat. Dissidents would “borrow” copies, typewriters and printers late at night and distribute the sheets by hand to trusted compatriots who’d pass them on.

Anyone who was caught could be, would be sent to prison, or into exile.

Among the Russian material published and distributed by samisdat were Bulgakov’s The Master and Margarita and Boris Pasternak’s Doctor Zhivago.

In occupied France — probably in any country occupied by an enemy but it’s the French occupation I know well — samisdat sheets, posters and publications abounded, such as this one below. 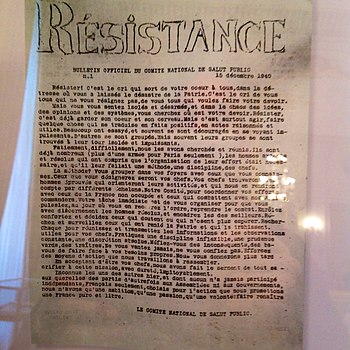 To sum up: the State determined what Soviet citizens could be allowed to see, in culture and newsworthy events. The State controlled all cultural and news media. The “news” Soviet citizens were permitted to learn about was cut, cropped and or wholly invented, i.e., faked, to support and praise the political system and its Dear Leaders.

So samisdat was sort of the (severely limited) internet of the Soviet Union.

Now, today, in the United States, the underground media — which are, strictly speaking, samisdat, since they’re self-published on social media and distributed as if they’re the only possible dissident Truth — is QAnon and its cabal of crazies, supported and promulgated by its Dear Leader and his Central Committee.

All the while our news media — our free press, supported by our Constitution — give us factual reportage and diverse opinions even when those facts and opinions contradict Dear Leader’s subterranean version of “truth.”

This entry was posted in Fascism, How I Learned The Facts of Life, political campaigns, Politics, The Facts of Life, Trumpism and tagged Amazon, Boris Pasternak, Doctor Zhivago, French resistance, KGB, Mikhail Bulgakov, samisdat, Soviet Union, The Master and Margarita. Bookmark the permalink.