“Fatal Attraction:” Above the Law weighs in on that ultra-messy lawsuit

But here is Above the Law, again weighing in on the mess (there’s a link in one of my links, above, to the first story I picked up from Above the Law) — which got Tabar fired from his “Biglaw” job. Above the Law’s new take is … could this case be a Fatal Attraction sort of situation? And to illustrate their post there’s a photo of Glenn Close looking, well, like Glenn Close in the film. Murderous. (We will not consider that rabbit, will we?)

Anyway, I may be tired of this story but I am not tired of another POV to any story, especially because Above the Law has read Tabar’s answer and counterclaims to the Kovalesky complaint. It’s what makes lawsuits so fascinating: there are at least two sides. (I’d LOVE to sit on the depositions. But no, all you eager-beaver deposition questioners: we do not get to attend depositions for a case we have nothing to do with. We can only attend our own depositions, and the depositions of our opponents.)

Fatal Attraction: Was The Biglaw Associate Accused Of Abuse Actually The Victim? 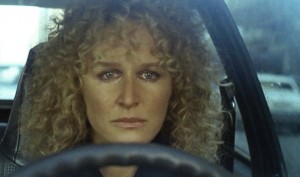 Glenn Close as Alex Forrest: she’s not going to be ignored.

One of the biggest Biglaw stories of 2014 so far has been the lawsuit filed by Angela Kovalesky against her ex-boyfriend, New York lawyer Samir Tabar. The beautiful blond Kovalesky alleged that Tabar physically abused her, threatened her with a knife, and stalked her — by dropping a dog tracker into her purse, among other things.

These allegations didn’t sit well with Tabar’s employer, Schulte Roth & Zabel. Not long after the filing of Kovalesky’s salacious suit, SRZ terminated Tabar’s employment. His impeccable pedigree — Oxford, Columbia Law, and Skadden Arps, plus some time in finance — couldn’t save him from the ax.

This is, in a nutshell, what Tabar alleges, in his answer and counterclaims in Kovalesky v. Tabar. And it’s what his new gorgeous girlfriend — actually, his fiancée — also asserts, in her own lawsuit against Angela Kovalesky….

This entry was posted in Law, suits and order. Bookmark the permalink.