I’ll tell you how I came to love and appreciate Mike.

But first, I’d better tell you what a Mike is.

Never mind about the weak side and strong side guys and no, I don’t know how these names came about. The important guy here is the Mike. The man in the middle.

Now I’ll tell you why and how I fell for the first Mike I noticed, Antonio Pierce.

Pierce played for the Giants from 2005 through 2009. You can read about his stats, how terrific a player he was, but no article will tell you how gifted he was as the Mike. So I’m going to tell you.

During the period Pierce played for the Giants, the team had a great defense. My definition of great defense: the lead running back for the opposing team never gets more than a couple of yards on a run, and absolutely never gets 100 yards in a game. When a back goes through our defensive line and gets to the linebacker territory, I feel it as a punch in the stomach. If you were watching me watching a football game, you’d see me twist involuntarily during such an opposition run.

Actually, I prefer the running back to be stopped behind the line of scrimmage but that’s just me who started watching football when Lawrence Taylor, Carl Banks, Harry Carson and then Jesse Armstead were playing. Yeah, I was spoiled, spoiled rotten.

Anyway, when Pierce was manning the Mike, my standard of short run or no run were maintained at a high level. I mean, a low level.

Then, in 2009 (I think), Pierce was injured. He came out of that game and could not play the next game.

I was stunned because the defense just…fell apart. Runners were running right through my guys. I might have broken a rib while twisting. Right through the rest of the season, the defense looked like a mess — a mess by my standards, you understand.

And that’s when I learned what a Mike does.

Because of the particulars of his neck injury, Pierce was never able to play again. (He’s now coaching in college.)

A football offense is plotted. A football defense is reactive. When a defense lines up against the offense, it has to make a calculated estimate, based on knowledge of the other team’s offense, what the offensive play might be. The offense knows what it’s going to do, or at least try to do. The defense doesn’t know.

Pierce was a film study geek. Along with practicing, he spent the week devoted to studying game film of the upcoming offense, collecting visual clues on how that offense might set itself, might disguise its planned play, might adjust, might change.

Then, with all that knowledge, when Pierce was on the field, he could redirect the defense to cover the play he interpreted would be coming.

I’m reminded of one of my favorite cornerbacks, Mark Collins, who played for the Giants from 1986 to 1993, through two Super Bowls. If a cornerback plays a really good game, the broadcast booth doesn’t usually mention him, because he’s covered his guy, usually a receiver, so well, the guy doesn’t get the ball thrown to him.

Probably the best cornerback game I’ve ever seen was a Monday night game the Giants played against the Niners. It was Collins’ job to cover Jerry Rice, a receiver long said to have been the best ever to have played the game.

The game turned into a great defensive battle which in the end the Giants lost 7 to 3. I don’t think I caught even a glimpse of Collins who covered Jerry Rice so well, Rice had less than 30 yards.

Later, I learned Collins was a film geek. He studied film of his next major opponent and said, quietly, he’d watched so much Jerry Rice film, he’d picked up a tiny tell, a way Rice would slightly adjust his feet just before the play began, an adjustment which told Collins the moves Rice would be making.

And that’s what Antonio Pierce did for the entire defense.

Our current Mike, another smart excellent linebacker, is Blake Martinez. Except he’s out for the rest of the year because his knee tore during a play. I was watching. I don’t think it involved a tackle but I do think it involved the turf.

Here’s a photo I took of Mark Collins at a pre-season game, when I had a sideline pass and a camera. Maybe someday someone can show me how to stick pictures in here straight. 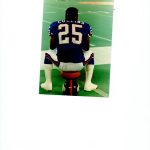