Invasion of the Straw Men

I’m probably late to notice this but Straw Men are being erected all over the place and showing up on Twitter.

Although it’s not only the right wing doing the building — I’ve seen some exaggerations from people who call themselves progressives, as well — here are three examples springing out of the Straw Man factory:

So now the woke mob wants to shatter stained glass windows and tear down religious artwork. Surprised we didn’t get here sooner. What next, tearing down churches? — Josh Hawley, GOP Senator from Missouri

I’m going on record now: If they try to cancel Christianity, if they try to force me to apologize or recant my Faith, I will not bend, I will not waver, I will not break. On Christ the solid Rock I stand. And I’m proud to be an American. — someone named Maggie Downs, who posts at @downsanddirty

A friend who works for a police department in Ohio said they received numerous calls today to investigate “Antifa dust” on the cars and driveways. It’s pollen. And now I can’t stop laughing about people calling the police on trees.

Straw Men all, extreme and false accusations of what the “Enemy” is doing to destroy their essence and ethos. (“Antifa dust”? Really?)

The only “woke mob” exists in the minds of racists. There is no mob; there are righteous protesters, a right assured to us by the same Amendment that guarantees these people the right to their religious beliefs without government suppression (or support).

I can personally guarantee Maggie Downs I have no interest in her whatsoever. Nobody is interested in forcing her to recant her faith. She is pathologically grandiose, seems to want to be a martyr. Problem with that desire is, you have to have someone who wants to make you a martyr. Nobody cares.

Given that I’m focused on the nonsense inherent in Straw Men, I paid special attention to the New York Times’“41 Cities, Many Sources: How False Antifa Rumors Spread Locally.”

Claims about the involvement of anti-fascist activists in protests of racism show the many ways false information spreads inside communities online.

In recent weeks, as demonstrations against racism spread across the country, residents in at least 41 U.S. cities and towns became alarmed by rumors that the loose collective of anti-fascist activists known as antifa was headed to their area, according to an analysis by The New York Times. In many cases, they contacted their local law enforcement for help.

In each case, it was for a threat that never appeared.

I saw a delightful photo on Twitter of around eight guys in some location that is not mine, fully dressed in heavy camo and lugging their monster guns, ready to defend their town from the Enemy. All I could do was laugh. They looked so damn stupid. 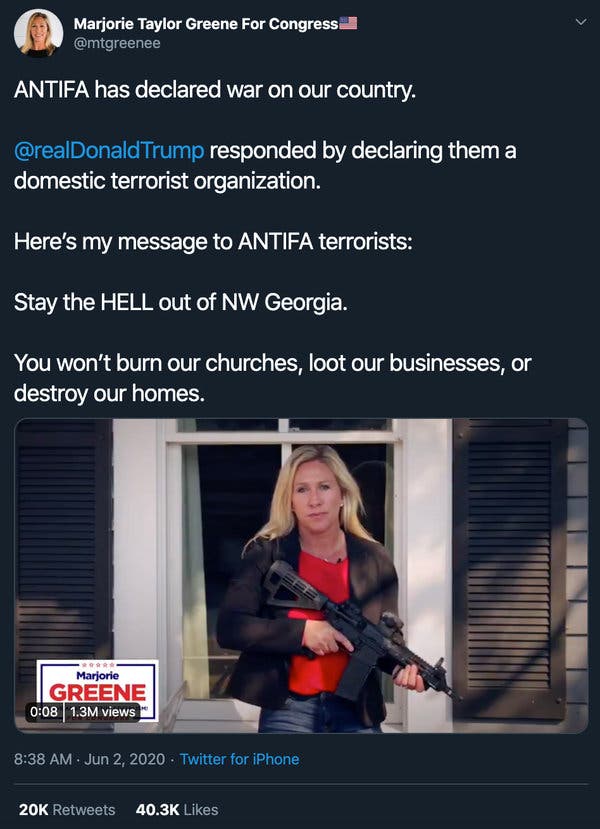