Yesterday’s New York Times printed this headline from their March 24, 1925 front page, under “On This Day in History”:

“This bill is a distinct protest against an irreligious tendency to exalt so-called science and deny the Bible in some schools,” said Governor Austin Peay. It wasn’t long after that John T. Scopes, a teacher in Dayton, Tenn., was charged with violating the law — a trial that was highly publicized and known as the “Monkey Trial.” The state law was repealed in 1967, but similar anti-evolution bills continue to go into and out of effect.

I have a bunch of things to say about this. First, thank you, NYT, for bringing it to my attention. Second, take a look at the date that law, the Butler Act, was repealed: 1967. From 1925 until 1967, it was a crime to teach Tennessee students who attended any school that received any public funding anything that contradicted the absolute truth of the bible.

John Butler, the eponym of this notorious, aggressively dopey law, was a farmer, religious fundamentalist and part-time legislator. According to Wikipedia, here’s how the Act came about:

…the author of the law, a Tennessee farmer named John Washington Butler, specifically intended that it would prohibit the teaching of evolution. He later was reported to have said, “No, I didn’t know anything about evolution when I introduced it. I’d read in the papers that boys and girls were coming home from school and telling their fathers and mothers that the Bible was all nonsense.” After reading copies of William Jennings Bryan‘s lecture “Is the Bible True?” as well as Charles Darwin‘s The Origin of Species and The Descent of Man, Butler decided the teaching of evolution was dangerous.

What’s not in my Times article? Multiple ironies.

From 1992 through 2003, my day job was as amanuensis to Peter Neufeld, a lawyer who, along with his friend and oftimes partner, Barry Scheck, became a key member of the Simpson defense team. I made my second visit to Dayton during the actual O.J. Simpson trial.

My work involvement with the Simpson case was, of course, peripheral, but I was nevertheless very much absorbed by it and certainly knew more about it and defense law than most laymen. My prime focus during the trial was the chasm between the facts of the case, and the way the media reported on them.

(Eventually, if we’re all very lucky, you’ll get to read my full experiences of the O.J. Simpson case and many others in a memoir about my working life, If Nobody’s There, I’ll Talk To Anybody.)

I’d planned my second trip to Dayton fairly well in advance. But in that summer of 1995 a conflict was presented to me. Peter asked if I’d like to come out to L.A. for a week and watch the trial.

He was offering a huge and generous gift. I fear I hurt his feelings when I had to say no, and explained why. Geez, I mean, I was running off to a remote corner of a deep south state to write about a trial 99.9 percent of the world didn’t know about, let alone care about, instead of attending a trial 99.9 percent of the world was devoted to in a way that struck me as unhealthy, a precursor of reality TV’s domination over reality.

So I was doubly whacked with the irony bat when I wandered through the basement of Rhea Country Courthouse–which also doubled as the local lock-up during the Scopes trial. (Scopes himself was not imprisoned in real life, although Inherit The Wind, the fictionalized drama about the trial had him incarcerated throughout.) 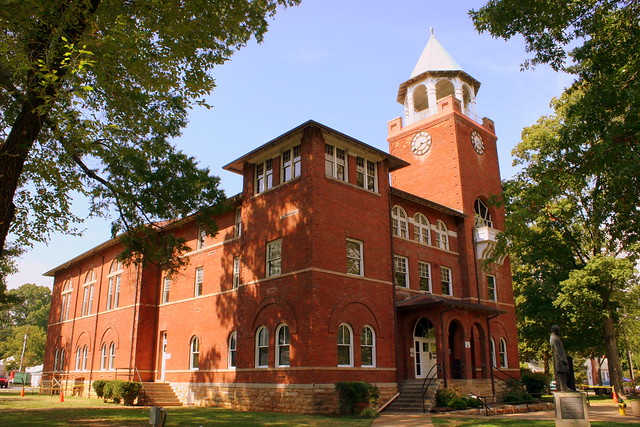 The basement had been turned into a charmingly, weirdly funky museum about the famous trial. It looked like a junior high school project, tossed casually into an unrenovated cellar and abandoned when the kids got bored. A visitor could imagine a PTA group selling cupcakes out of one of the remaining prison cells.

It’s a fair and balanced operation down in that basement–that is, unless you understand the town is still dominated by the same fundamentalist Christianity that spawned the Butler Act.

Fair and balanced: one side of the basement is occupied by the prosecution; the other side by the defense. One wall has a big photo blow up of William Jennings Bryan; the opposite wall a big photo blow up of Clarence Darrow. There are little museum-like cases containing ladies’ fans (the trial took place in a steaming hot July, sans A.C.) and bibles and such; another case contained a copy of Origin of Species, if I remember correctly.

Don’t remember whether one curious fact about the trial was presented by the museum, but the actual, real life Boy Named Sue (link to a thousand performance videos, just in case action gets you excited) was a Dayton lawyer, Sue Hicks, who with his brother and partner (not named Sue) was part of the prosecution team.

So there I was, exploring the oddities of the Scopes trial museum, when I was joined–surprisingly, since it seemed to me that no one visited that place, ever; it felt as if covered with decades of negligence and dust–by a middle-aged couple, either retired or on summer vacation.

We didn’t speak to each other. Maybe we nodded pleasantly but that was it.

One prominent feature of the museum was a banner–I think the fundamentalists loved this–informing us that the Scopes trial, similar to the Creation, went on over a period of six days (and, one assumed, six nights).

The lady read this notice carefully. She then turned to her husband and, in a thick, possibly Georgia drawl, said, “Well, it was a lot shorter than O.J.’s.”

Tweet
This entry was posted in The god problem and tagged O.J. Simpson trial, Scopes trial, the god problem. Bookmark the permalink.