♥ The House just passed a bill capping the monthly cost of insulin at $35 for insured patients. (193 ♥ Republicans, over 90% of the delegation, voted “no.” So irrational. Don’t those 193 Republicans have constituents with diabetes?) As Tristan Snell, a lawyer I follow on Twitter, wrote, “What in God’s name is the possible counterargument for NOT capping the price of insulin?!” The bill now goes to the Senate.

♥ ♥ Amazon warehouse workers on Staten Island have voted to form the company’s first union in the U.S. As the Times writes, “…one of the biggest victories for organized labor in a generation.”

♥ The House just passed the Marijuana Opportunity Reinvestment and Expungement (MORE) Act, which decriminalizes marijuana at the federal level, 220-204.

♥ And in the world of ongoing criminal prosecutions, an Alabama ♥ man was sentenced to 46 months for bringing guns, Molotov cocktails, and other weapons to Capitol Hill on Jan. 6.

♥ Economy Update: Unemployment is down to 3.6% and the economy created 431,000 jobs in March. 90% of the jobs lost during the Trump Presidency have returned. Here’s a picture: 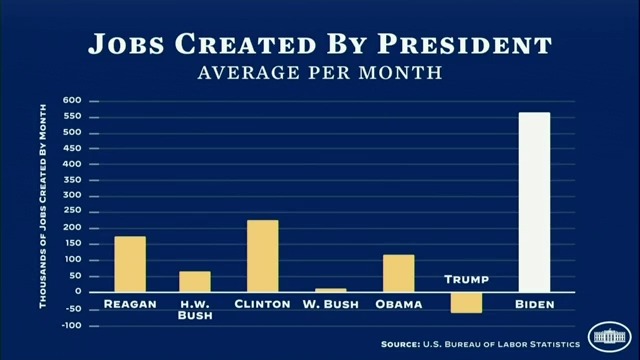