Once upon a time I sailed on Big Boats

I’m sure you remember our little discussion about Big Boats and their infantile owners. No? OK, here is the link.

Before the craze among zillionaires for buying bigger and bigger boats, I worked for Malcolm Forbes who was, I suggest, a progenitor of the trend. When I started at Forbes in the 1980s, Malcolm had his fourth big boat called The Highlander. In 1986, he sized up to The Highlander V.

Not only boats upsize; so, apparently, does memory. Until I read some articles about that Highlander, I was sure it was around 240 feet long. It wasn’t. A mere 150+ feet. A rowboat. Regardless of the size, along with my great friend and Forbes colleague, Peg, I had some adventures on High IV and subsequently on High V.

Note: Let me proactively disabuse you of the suspicion I’m going to crow about floating around in ultra-luxury. I’m not. Never expect such irritating crap from someone born with a satirist’s soul. And anyway, my big boat experiences were less awesome than antic. So, step on board with me.

The basics. Malcolm Forbes’s Highlanders were used to promote the magazine, to pump up the ad sales. It was a clever operation. On each autumn Saturday, an exclusive group of top businessmen and their wives (that’s how it was then, don’t yell at me) boarded The Highlander at its New York City marina for a full day’s trip up the gorgeously autumnal Hudson River to West Point, where they’d disembark to watch the Army football game. After which they’d get back on board to return to NYC.

During the up-and-down, each CEO would be fed and boozed and schmoozed by one of the Forbeses (several of his four sons participated) about increasing their advertising pages. Each Forbes had hidden a typed “hit list” the size of a credit card with his targets’ ad pages info. After each chat, Malcolm would visit one of the Highlander’s bathrooms where he’d note on the card the results of the chat, i.e., a promise to increase ad pages, or a demurral.

Back in the office on Monday, Malcolm would dictate a memo to the Forbes sales department about the results of his hits, so the sales reps could follow up.

I don’t know how the sons performed but Malcolm was an engaging, charming salesman. And there was the big boat as a venue. Theory was, business could be conducted more effectively in luxurious circumstances. I have no idea whether this is a valid belief, or simply an excuse to write off boat expenses on the annual tax filings.

On occasions, Malcolm used The Highlander for miscellaneous events. Here’s a picture of one of them, with Malcolm, his wife Bertie, and a few other people I don’t recognize. 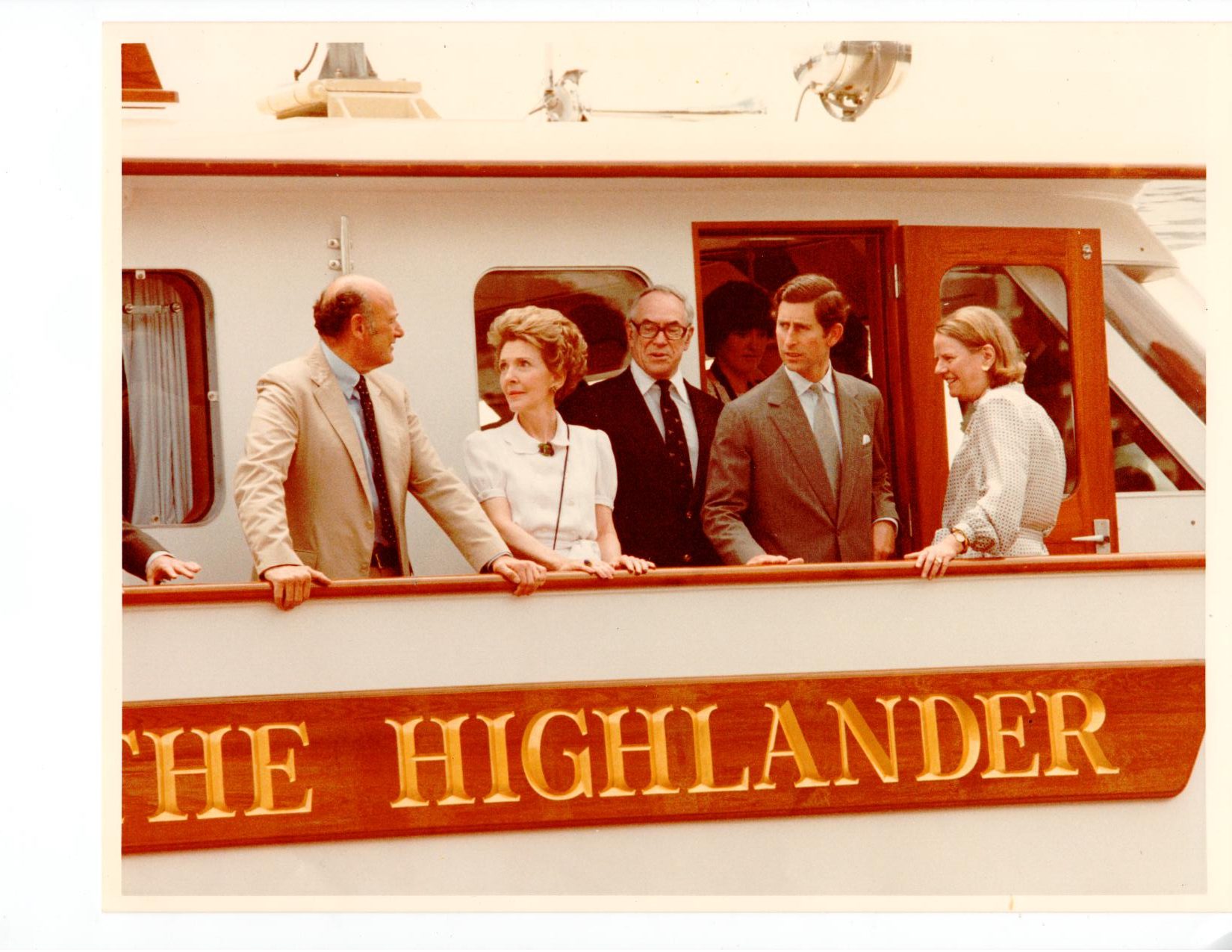