Scalia Speaks! From the grave. I respond. From New York

Don’t know if you, like me, are all salivating in anticipation of a new book by Antonin Scalia called Scalia Speaks.

But wait, I hear you murmuring. Isn’t Scalia, uh, like, um deceased? Late? Demised? (I’m trying to remember all the verbs applied to the dead parrot, you know what I’m talking about.)

And isn’t it true that I, Naomi, was never much of a fan of Scalia? To such a point I never want to hear him speak again?

Yes. But he has had an afterlife–although it didn’t go entirely the way George Mason University planned.

(On the odd occasion when I’ve mentioned George Mason U, people have said, “What?” That is, they’d never heard of it. I’m not now going to warp the relatively straight lines of this post by entering into a full discussion about “libertarianism,” which does connect to  GMU. Suffice it to say for now, if you are sitting around wondering where this place you’ve never heard of got so much money it could call itself a university…think Koch.)

Anyhow, a few days ago I read a tweet from Christopher J. Scalia, one of Scalia’s sons, which attached a bit of a transcript from an interview Scalia (when he was alive) did with Fox’s Chris Wallace. Wallace mentioned a dissent Scalia wrote which was criticized by pretty conservative and ridiculously prolific federal Judge Richard Posner. Wallace asked for Scalia’s response: 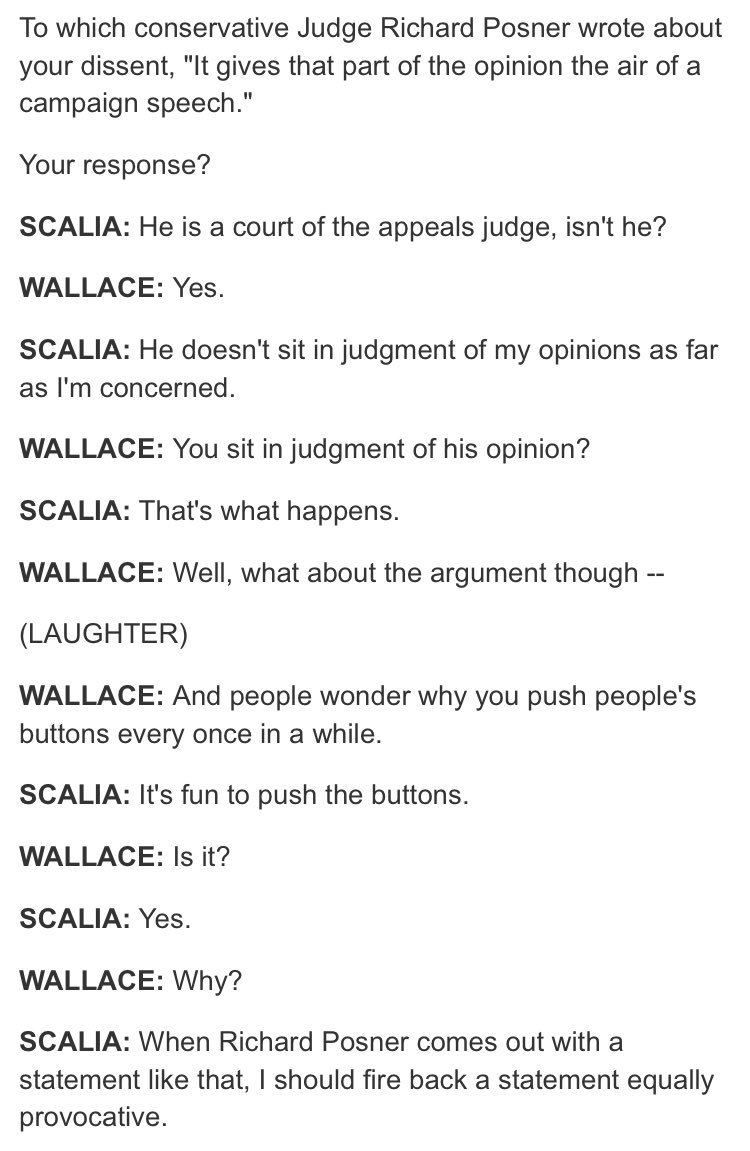 Relatively surprised at how irritated I can still become at anything Scalia said, I tweeted a response:

Thanks for reminding me how much and why I loathed Scalia.

In response to which, I got the below tweet from Son of Scalia:

A couple of things. First, how important am I that Scalia’s son responds to me? Not. I’m way too humble to believe this was an individual response. I assume some sort of PR bot was let loose on Twitter and spewed out this response anytime anybody tweeted “Scalia.”

Second, the responding tweet makes no sense — “Any time, Naomi!”?? “Any time” for what? Is this an invitation to a bot duel? Am I supposed to have my second bot get back to Christopher Scalia when we will pick Weehawken for our duel location?

Third, Christopher Scalia really bugs me by reminding me to preorder Scalia Speaks. And that caused me to check on which publishing company is putting out this thing.

It’s Amazon. Which means, as far as I can tell, it’s basically a self-published, i.e., vanity book. Which means no publishing company wanted to publish it.

And no, I will not be pre-ordering, ordering, getting it from the library, or anything else.