When TFG and McConnell were shoving piss-poor judges onto the federal courts, I heard a lot of doom and gloom. Indeed, I shared the doom and gloom when it came to SCOTUS, and the open display of dishonesty and intellectual mediocrity during the hearings.

But I was not so fearful about the district and appellate court appointments — as awful, as lousy as many of them were. I tried some soothing and explaining why I didn’t believe these lower court appointments were going to turn us overnight into a legal swamp. I don’t really have to explain any more. The judicial debacle caused by Aileen Cannon. That’s all I have to say.

Because here was one district court judge doing what everyone feared TFG’s “judges” would do — stupid stuff in his favor. Then she was smacked around by a panel of three on the appellate court which governs her. And two of those judges were appointed by TFG and McConnell.

There is a point at which legal education and, probably, shame enter the judicial picture. The result is below: Cannon was told to dismiss the whole mess. And she did.

So sneer at her for a while and please feel better about our court system. Especially because Biden, Dick Durbin and Schumer have topped by a lot TFG’s number of judges at this point in his tenure, and the judges they’re putting on the bench are really exciting people. 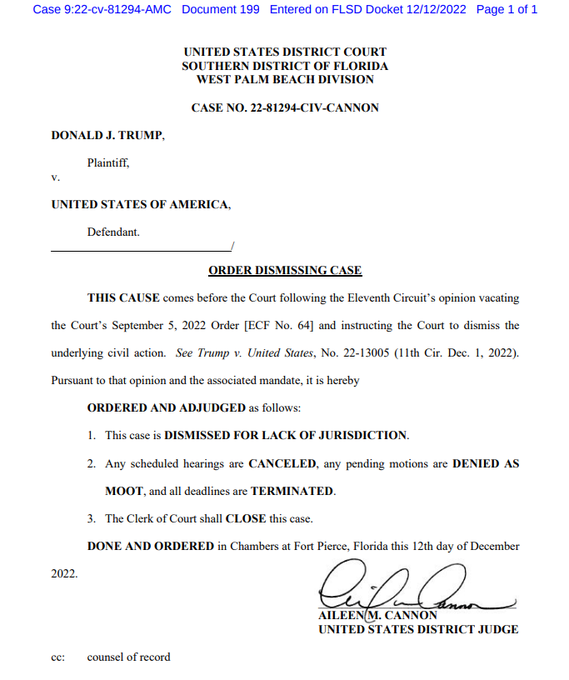