When you’ve done so, ask yourself whether you’re sitting there (a) wondering why you’ve never heard about the National (now Global) Economic Security and Reformation Act before now, and what you want to do about it considering all your debts have been forgiven; or (b) sniggering in that repulsive superior style displayed by those of us who are not paranoid.

Below that little squiggle is All Kevin.

Did Congress Forgive All Your Debts by Passing a Law Nobody Knows About Because of 9/11? 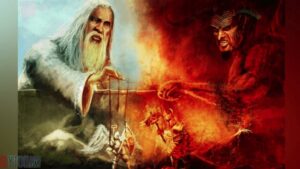 I hadn’t heard of the National Economic Security and Reformation Act until recently, but there’s a good reason for that. Congress secretly passed NESARA more than two decades ago, wiping out all debts and creating a new currency, but it never had the chance to make this public. It had planned to do so on September 11, 2001, but this was ruined by the destruction of the World Trade Center. Of course, the timing was no coincidence, because the Illuminati deliberately blew up the WTC to keep the American people from learning about the law, to destroy all evidence of it, and to seize the gold that had been meant to support the new currency. But NESARA was such a good idea, it went global. That’s the G in GESARA, a treaty that many countries have signed, including Canada. And that, your Honor, is why Canadians don’t have to pay their mortgages.

That’s what Karen Wai King Lew told the Supreme Court of British Columbia earlier this year, according to the CBC. But on July 12, Justice Sharon Matthews rejected this seemingly ironclad legal argument, allowing the Bank of Montreal to foreclose on Lew’s property.

What could explain this travesty? Well, one problem may have been the complete lack of evidence that any part of the argument was true.

Lew didn’t even mention it in the foreclosure proceeding, where she argued only that she needed more time to pay. She described various financing possibilities, including the imminent arrival of a relative who would lend her the money. The magistrate agreed to post-date the order by about a month to give Lew time to come up with the money, but surprisingly, the mystery relative didn’t show up.

Lew appealed, having unfortunately learned only after the hearing about the secret law that meant she didn’t have to pay her mortgage. So it was all just a big misunderstanding, she told the appellate court.

The court’s opinion suggests that it, too, had not heard of NESARA or GESARA before Ms. Lew brought it up, or at least that’s what the court would have us believe…

If you still feel shaky after reading that — probably because mention of the Illuminati has been fairly rare these past few years, at least in the world I occupy — you might want to continue with the rest of Kevin’s post, which includes quite a few things the Canadian judge wrote. And more. Like how Bill Clinton signed this into law at gunpoint, or something to that effect.