But not from me. I have too much to say and have thus become rather speechless. The only comment that had resonated with me until today was from a dear friend who is a lawyer. She wrote, “It’s the only time I can remember in my life not being able to read the New York Times.” She followed up with, “I comfort myself by remembering that I lived through Reagan.”

I agree, passionately, although as I’ve said here, I don’t think all of the country has entirely escaped Reagan.

But today I got this (personal) note from Alan Grayson (politicians have become so savvy about personalizing general messages), the outspoken, brilliant and witty Congressman from Florida. He said everything I’ve been thinking. Here it is:

Last Wednesday, at EPCOT Center in Disney World, I heard a father shout this at a crying child in a stroller: “Blame Obama, Shawn. It’s all Obama’s fault.”

And there, in a nutshell, is the story of what happened on Election Day 2014, the day before. “Blame Obama.” For what, I’m not sure. But blame him.

(A little background: Since 1987, Disney has run Super Bowl, World Series, NBA Finals and American Idol ads where the winner is asked “What are you doing next?” and the reply is “I’m going to Disney World!” I represent part of Disney World. On Election Night 2014, my first re-election, several local reporters asked me “What are you doing next?” The imp in me replied, “I’m going to Disney World!” So I did.)

For the record, the high temperature in Orlando last Wednesday was 82 degrees. It was sunny. EPCOT was holding its annual Food and Wine Festival, which is spectacular. It didn’t seem like there was much to cry about. But kids being kids, there must have been something that upset little Shawn.

Maybe Shawn was angry that Goofy had never said a word to him. Maybe he wanted to go on Space Mountain again – which, unfortunately for him, is located in the Magic Kingdom, not EPCOT. Maybe he wanted one of those Mickey-shaped popsicles, and he didn’t get one. I’m not sure why Shawn was crying, but I am sure – absolutely certain — that President Barack Obama was not the cause of little Shawn’s grief. Yet that’s what Daddy told Shawn. Shouted at Shawn, actually.

When I heard this, my first reaction was that maybe they were pulling MY leg. My name recognition in Orlando is roughly 117%, and whenever I go to Disney World or anywhere else, mostly nice people say mostly nice things to me. But they were not pulling my leg. I was behind Shawn’s family, by around 30 feet. I never saw their faces, and they never saw mine. They never looked back at me, either before or after. If it had been a gag on me, they would have looked back, to see my reaction.

Nope, this is simply how certain people raise their children today, in America, in the year 2014. “We hate President Obama, and you should, too.”

That was the “issue” last Tuesday, and it proved to be a very powerful motivator. Hatred often is.

It has been noted widely that the Democrats ran an issueless, issue-phobic campaign. For them, this campaign was like the Jerry Seinfeld Show – a show about nothing. The primary issue put forth by the House Democrats was that there should be a law against lower pay for women doing the same work as men. Well, there already is such a law. It’s called the Equal Pay Act, and it was enacted in 1963, when I was five years old. When this was pointed out to some Democrats, they gave the Emily Litella response: “Nevermind.”

Less noticed, however, was the fact that the Republicans also ran an issueless, issue-phobic campaign. I don’t remember any of them promising to suppress voting, prohibit all abortions, indulge polluters, give huge tax breaks to billionaires and multinational corporations, gut Social Security and Medicare and shred the right to organize – even though that’s exactly what they’re going to do. Instead, the Republicans said “Obama stinks, and we’re against him.” In fact, that was all they said.

There was an oft-circulated post-election chart pointing out that Obama had slashed the federal deficit, slashed unemployment, increased consumer confidence, etc., etc. But I would venture to say that none of that matters to those voters who had become convinced that Obama is Beelzebub. Or Mephistopheles. Maybe both.

But the only lesson that matters to the GOP is this: What President Clinton called “the politics of personal destruction” works for them – big time. Which is why I can predict, unfortunately, that over the next two years, we’ll be seeing a lot of this: 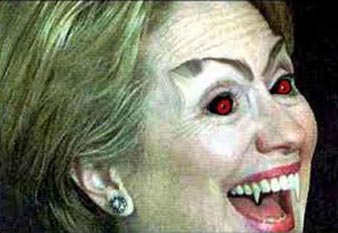 This entry was posted in Law, suits and order and tagged elections. Bookmark the permalink.