The last Big Boat tale, with one Big Boat, one huge boat and one biggest boat of all 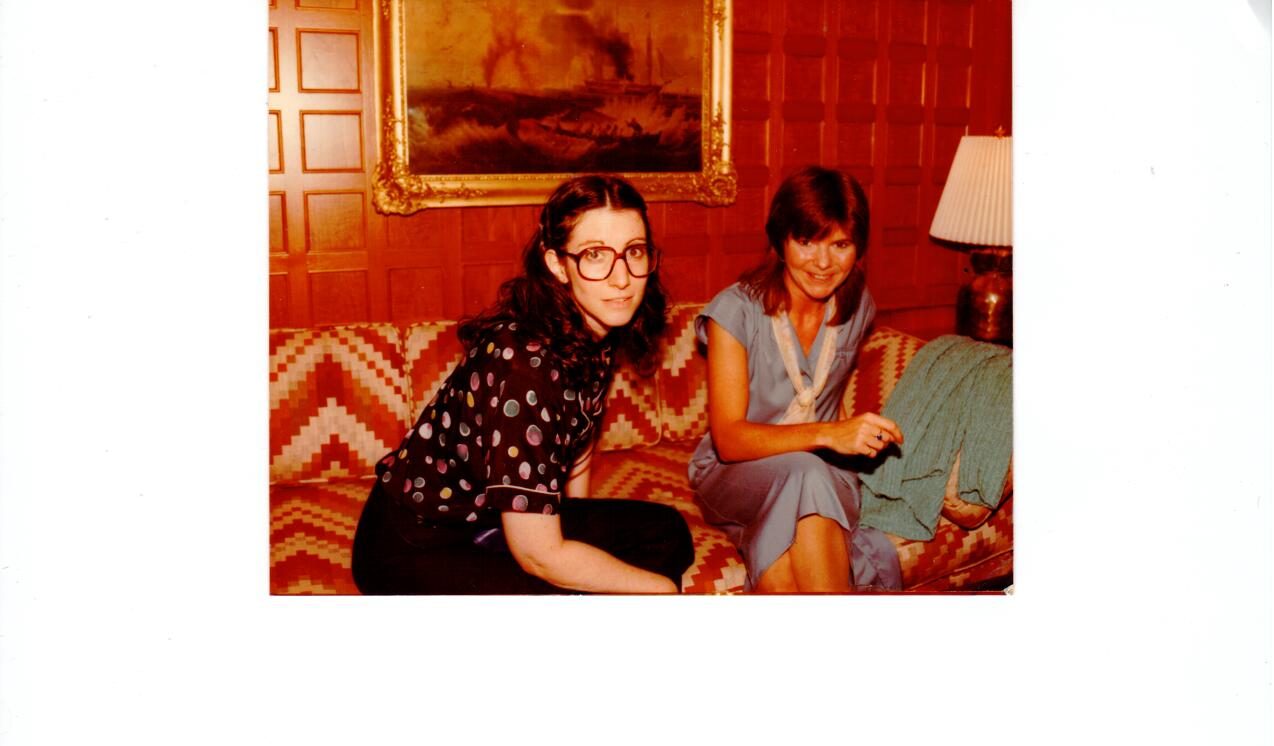 The photo is of Peg and me in a cozy den on the Highlander, afloat, yet again, in the middle of the Hudson River. It is the 1980s, which maybe explains our hair. I am wondering why I’m wearing huge glasses, since my eyes are usually made viable by contact lenses.

What were we doing there? We were waiting for something to happen.

Malcolm Forbes’ major asset was his talent for beguiling and unashamed self-promotion. For selling his presence in the world, along with the source of his prominence and wherewithal, Forbes Magazine.

Some day, if you’re all very good little boys and girls, I’ll tell you about the balloons custom-designed to advertise the magazine in India (an elephant) and Egypt (the Sphinx, which, at a New Jersey balloon meet, I watched as it caught on fire and made a crash-landing). There was also a Norman chateau balloon, a copy of his own chateau, for reasons I never understood.

Malcolm staged his own attention-grabbing events but was buoyantly opportunistic about hooking onto other notable events. Such as the one Peg and I were waiting for, the exquisitely slow approach of the WWII aircraft carrier Intrepid, as it was tugged from its temporary residence in Bayonne, New Jersey to its permanent berth at the 46th Street Hudson River pier.

It was an event. I think plans included fireworks and/or cannons as the massive thing was shoved into Pier 86, and we, surrogates for Malcolm Forbes (he himself was somewhere else if I remember) would be in his own Big Boat, cheering on this historical instrument of successful war.

(As I write this, it strikes me that Malcolm had a penchant for exposing his Big Boat to sad shrinkage by displaying it next to really really big boats. If a sort of phallic braggadocio is the end game of owning a Big Boat, what Malcolm was doing was the metaphoric equivalent of erectile dysfunctional exhibitionism.)

When we on the Highlander first took up our spot on the Hudson, the Intrepid was a blip on the horizon. I know this because Peg, our Forbes pal Merrill and I went onto the Highlander’s deck to peer into the distance, i.e., at Bayonne, New Jersey to see what was what. What we saw was a dot. So we all went downstairs to the cozy den, parked ourselves on the fine upholstery and welcomed the crew member who’d been designated as our food and drink supplier.

We talked and laughed and snacked and drank. Every once in a while, one of us would say, “I’ll go check,” would walk up onto the front deck with a wine glass in hand, peer into the distance, and retreat to the den. After an hour or so, the blip had become a bigger blip.

And that was how the entire afternoon went. A perverse filmmaker would have to be stoned into a quasi-coma to replicate in real time the advance of the Intrepid. Hours and hours went by, drinks were poured and swallowed, regular blip visits to the deck were on legs more and more wobbly.

Really, I don’t remember how many hours it took before the Intrepid took on the appearance of a toy aircraft carrier. But it did, and eventually it got close enough to be properly awesome — although a relic of olden times and much smaller than aircraft carriers are now.

It was late afternoon when the Intrepid was edged into its berth. I think Peg had a date and had to leave but Merrill, who understood men in armed forces uniforms, talked us onto the carrier where we wandered buzzed and blind in the massive, unlit and almost empty innards.

I believe there’s more inside the Intrepid now; it might be worth a visit for those who appreciate such things.

One morning in 2004, I got myself out of bed for a purpose that seemed peculiar even to me.

I don’t like mornings. I especially do not like mornings at 6 a.m. but that’s when I got up, got dressed and walked six blocks west to the Hudson River. It was so foggy it was questionable whether New Jersey still existed.

Why was I there? Because of the inaugural visit of the brand new ocean liner, Queen Mary II.

I’ve never had any interest in ocean liners, have never had a desire to travel on one. During my childhood, there was a certain excitement when one of the family adults drove us kids into Manhattan along the West Side Drive. As we approached the piers we could see the smokestacks of the liners poking above the pier buildings, and then the noses of the boats themselves as we passed. If we looked quickly, we could see the names of the boats, could see if the famous ones were in port.

It was exciting. The ships were so large, so glorious. But by 2004 I was an adult, had been a New Yorker for a long time, and no longer got excited at huge boats.

Yet there I was, at the Hudson, waiting for the biggest ocean liner ever to arrive. Somehow, all my nutty experiences with Malcolm Forbes’s boats had stirred up something in me. I was somewhat annoyed at myself but there I was.

Some time passed — but not as long as waiting for the Intrepid. I had read the QMII was so tall, there was a tad of anxiety about whether the smokestacks would slip under the Verrazzano-Narrows Bridge.

The fog did not lift. But suddenly a loud, long basso horn sounded, and sounded a few more times and a boat’s prow magically pierced through the fog and then there she was, the QMII, bigger than anything I could have imagined. (And she made it under the bridge with a mere 20 feet to spare.)

She was my last big boat and I’m fine with that. I own these memories and relish them, but I wouldn’t want to own any of the boats.