When it comes to fake ‘n’ crazy news, one woman sums it up for the rest of us

Her name is Marjorie Greene and she just won the GOP primary for a House seat in an ultra-red district of Georgia. 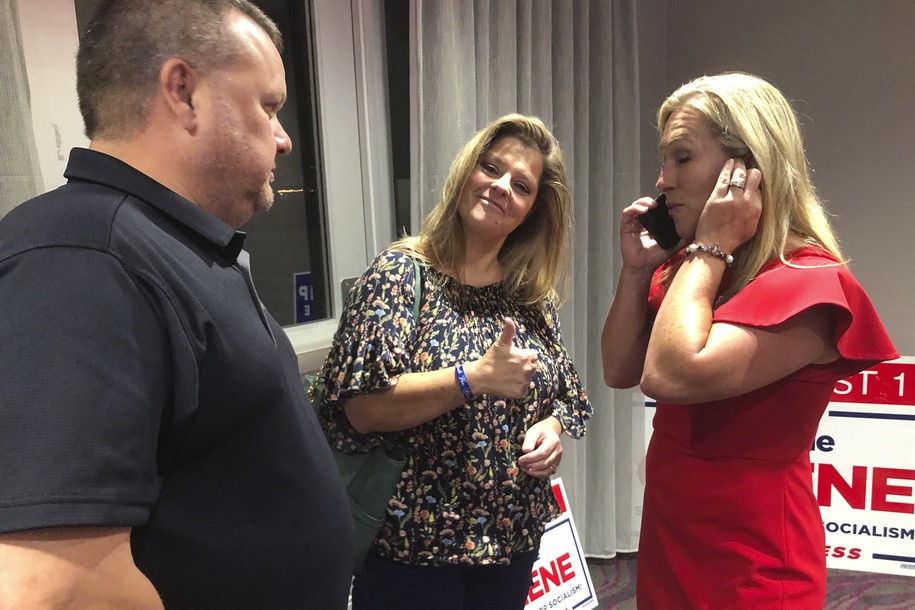 You’ve probably heard of her previously because she is notable. No question. She is a hearty supporter of QAnon, the amorphous conspiracy internet thing.

She will probably win the election and become a member of the House of Representatives.

For the majority of us, she is highly useful: everything she supports and says can go directly, do not pass Go, onto a summary of subjects and terms to watch out for and label instantly as fake, false, lies, paranoia, and conspiracy thinking that bear no resemblance to fact or reality.

Here, under subheadings which I’m printing in red as a way of saying WARNING: THIS IS CRAZY GARBAGE, are words and phrases which will appear in political statements or ads against Joe Biden and Kamala Harris or any Democrat. If you spot them, you will know you can toss them into the junk receptacle of your brain.

I’m grateful to DailyKos Elections for a Greene run-down from which I derived this summary. I’m not going to comment; I leave that to you.

Donald Trump tweeted that Greene was “strong on everything and never gives up – a real WINNER!”

Republican leaders, including Trump, continued to congratulate Greene for her victory.

Guns and the 2d Amendment

…early October of 2017, four days after a lone terrorist named Stephen Paddock murdered 58 people at a concert in the deadliest mass-shooting in American history, Greene put out a video where she wondered if the attack was part of a government plot to try to pass anti-gun laws.

…shared a post on her Facebook page that accused the FBI of taking part in a cover-up and added, “Every American knows we have been lied to.”

Greene was quite the fan of QAnon. She had used her social media account to issue several tweets defending the conspiracy theory, and Greene even implored her followers to send her any questions about it so she could “walk you through the whole thing.”

And in a video that would surface later, Greene said that it offered “a once-in-a-lifetime opportunity to take this global cabal of Satan-worshiping pedophiles out.”

In May, the AJC reported that Greene had posed for a photo earlier that year with longtime white supremacist Chester Doles. Greene’s campaign didn’t show the slightest bit of contrition…

Politico unearthed hours of self-narrated videos Greene posted to Facebook: In those videos, Greene compared Black Lives Matter activists to the Nazis who marched on Charlottesville in 2017…

Greene ran a commercial where she held an assault rifle and told the audience that “antifa terrorists have declared war on America.”

She then casually threw out some antisemitic talking points by declaring, “George Soros, Hollywood elites, and Joe Biden’s staff are funding antifa.”

[She] called Holocaust survivor George Soros a “piece of crap,” repeating the lie that Soros was a Nazi collaborator…

Facebook later removed the ad from its platform, saying it “advocates the use of deadly weapons against a clearly defined group of people.”

Islamic invasion into our government

…declared that “[t]here is an Islamic invasion into our government offices right now.”

On election night, Greene said of Speaker Nancy Pelosi, “She’s a hypocrite. She’s anti-American. And we’re going to kick that bitch out of Congress.“