Where will Trump & family go after election? Plus, Russian gas explosions

I’ve got an idea. Which came to me very early this morning when I woke up for no reason at all.

Instead of going right back to sleep, my mind connected a strange and ominous story about Siberia with, well, the title above.

First, let’s deal with Siberia — which I read because anything Russian nowadays draws my attention. Here’s the full New York Times headline, the one my eyes fixed on when I noticed it, while simultaneously saying, “WHAT?”

Land in Russia’s Arctic Blows ‘Like a Bottle of Champagne’

Since finding the first crater in 2014, Russian scientists have documented 16 more explosions in the Arctic caused by gas trapped in thawing permafrost. 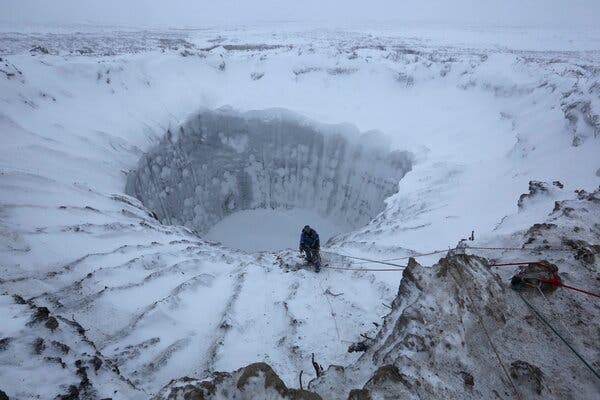 That’s a photo of one of the craters, taken in 2014 by a Russian photographer. The story was written by Andrew Kramer, a Times reporter with the dateline Moscow. Here’s how it begins:

MOSCOW — A natural phenomenon first observed by scientists just six years ago and now recurring with alarming frequency in Siberia is causing the ground to explode spontaneously and with tremendous force, leaving craters up to 100 feet deep.

When Yevgeny Chuvilin, a Moscow-based geologist with the Skolkovo Institute of Science and Technology, arrived this summer at the rim of the latest blast site, called Crater 17, “it left quite an impression,” he said.

The pit plunged into darkness, surrounded by the table-flat, featureless tundra. As Mr. Chuvilin stood looking in, he said, slabs of dirt and ice occasionally peeled off the permafrost of the crater wall and tumbled in.

“It was making noises. It was like something alive,” Mr. Chuvilin said.

While initially a mystery, scientists have established that the craters appearing in the far north of western Siberia are caused by subterranean gases, and the recent flurry of explosions is possibly related to global warming, Mr. Chuvilin said.

So, permafrost is melting, “possibly” thanks to global warming and subterranean gases are taking advantage of the relative softness to burst up and out.

Pretty awful. Except for the snow, the exploding craters are making the land sound like a junior Mordor.

Meanwhile, I’ve been doing some half-assed travel planning for the Trumps’ exile. Which they don’t know about, of course. Even half-assed, I’m way too competent for them.

A few years ago, I decided on Sochi, the Russian resort city on the Black Sea, where Putin spent $$$billions to set it up for the 2014 winter Olympics. Which should be remembered as the event outside of which the Putin resistance performance group, Pussy Riot, were whipped — yes, literally whipped — by Cossacks. Yes, Cossacks. (Correction: I identified Pussy Riot as all female; I’ve since learned they are co-ed and I apologize to the brave guys who are part of it.)

Reportedly Putin has an estate in Sochi. And Russia does not have a mutual extradition treaty with us, so I was thinking, yeah, Trump would like this. And we’d never have to hear from him again.

I got a lot of grief from friends and relatives about Sochi. “Way too nice for those people,” is what I was told. Well, that was then. Now, Trump and his family deserve much more than Sochi. Here’s what I’m thinking:

First, there will be no transition. Trump will not hang onto the White House until he’s dragged out, because if he waits that long, he will be arrested, indicted and not given bail. I expect almost immediately following the certainty of his loss in the election (we all know all the votes might not be counted on November 3), he will evacuate, certainly before his passport is taken from him.

I won’t waste time plotting his escape but I think he will go out for, say, a helicopter ride, or a golf game and…just disappear.

His family, the whole mishpocha (we can call them that because Jared, Ivanka, you know), will sneak away, one or two at a time. Sort of like musical chairs, except the last one sitting gets to go to prison forever.

And where will they go?

I’m no golf fan but take a look at this photo from the area, and the description, which is, “The loss of permafrost has transformed the terrain in Yakutia, Russia, leaving an obstacle course of hummocks and craters caused by shifting temperatures underground.” Credit…Emile Ducke for The New York Times. 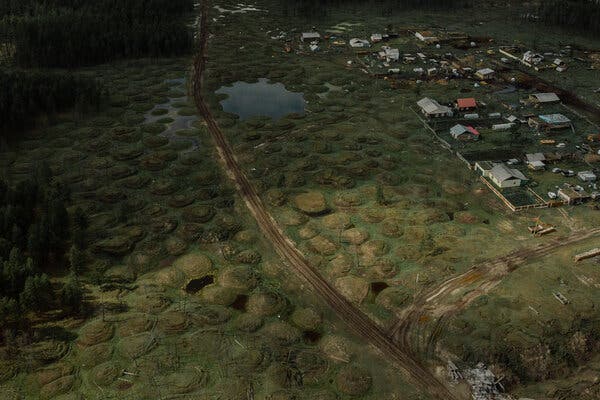 Now tell me it doesn’t look like a new and challenging Trump golf course, Trump Yakutia. And if those spontaneous gas eruptions are still simmering, the bottom of one of those craters could be an Ivanka Spa Experience.

Oh, I’m having too much fun working this out. Take over for me, will you? Let’s design Trump’s exile.

P.S. I don’t care where they go as long as I never have to hear from or see any of these faces again. Ever.