Yahrzeit for my cousin Ruth

Do you remember last November, when a mysterious steel monolith was discovered in a remote area of Utah? But…now you see it, now you don’t. The monolith appeared, stuck around a few days prompting a lot of entertaining detective work, then disappeared.

It was playful human beings, not aliens, who made it and removed it.

When I read that first delightful news in the Times, I quickly recalled the monolith my cousin Ruth and I came upon in Brittany years ago. I reached for the phone to call her so we could reminisce and laugh together.

My hand stopped, just before it wrapped around the phone. I couldn’t call Ruth. Shattering my calm certainty she would live forever, Ruth had died on Friday, November 20th, 2020.

A year ago today.

Ruth was the oldest of us fifteen first cousins. She was the oldest from the beginning, the first-born. So she knew all of us for our entire lives. Yet she herself was never old.

The times we got together when I was a kid, she treated me like an interesting grown-up.

Ruth was the only one of us who ever met our grandparents. 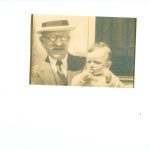 ⇐ Ruth on the right, eccentric Grandpa Jacob on the left, both slightly tilted (my fault)

Several of my first cousins died before Ruth and made holes in my life. But as long as Ruth lived, we were all immortal. Now I’m not so sure.

What is it about my cousins?

When I was around 12 or so, a good friend told me she couldn’t make plans with me for the weekend; several of her cousins were coming for a visit. “How great!” I said. Because whenever several of my cousins were going to visit, I got excited and happy.

My friend made a face. She didn’t like her cousins.

I recall the genuine shock she threw me into. Not like cousins? Impossible.

Even as a big bunch growing up in separate towns, we cousins were close to each other. I’ve been contemplating what to call this bond, because it was more a bond than anything else. Love would be a weak word to use. I don’t have another one.

We enjoy each other thoroughly. When we gathered in a group larger than, say, one, we tell stories about the family and laugh a lot. Ruth, a clinical social worker, found our family and its stories fascinating. We all agreed.

Our connections for each other were and are indissoluble. There are no standards of behavior, of ideas, of looks, of achievement that must be met, no lapses that could fray the connection. As adults, we’ve taken a number of paths, some of them painful detours; as children, though, we lived in one circle, the family, and I sense that’s how we see each other today.

Maybe it’s a kind of beneficent trauma. This was a sudden, bright thought I just had. I want to call Ruth and discuss it with her.

A discovery. The longer and deeper I know someone, the less possible it is to describe her. So I’ll tell you how Ruth looked. The externals are easy.

She was tiny in physical size, with a huge character, laugh, voice and mind. She had a puckish face that never aged.

Had she always been auburn-haired? I think so. Brownish-red and short. Always meant to ask her whether she’d ever considered growing her hair long, but forgot. Her mother, my Aunt Sadye, had, like my mother, long, long hair which she wore up on her head in some complicated figuration which might include braids, but Ruth, no. Short and rumply-curly.

Although she had five children, twelve grandchildren and, now, two great-grandchildren, and could have chosen to swing the family matriarch mantle over her shoulders, she was nothing like a matriarch. She was one of us, just a few years older.

She wore colorful clothes. I emphasize this because so many women settle into black. Ruth did not.

Whenever we got together, Ruth with Arthur, her longtime mate, I got the same sort of anticipatory delight I’d had when I was a child and a visit with cousins was in my immediate future.

A few summers ago, Arthur told a family gathering he’d once asked Ruth if she wanted to get married.

Ruth and I plan our trip to France

I’m pretty sure it was Ruth’s suggestion, that trip to France. This was before Arthur and she’d recently become a widow. Although she didn’t put it that way, I figured it’d be a pleasure for her to take a break from mourning. Ruth never struck me as the sort of person who was going to sit shiva for any extended period. (See above, re clothing colors.) I don’t think she had much patience for ritual.

Ruth wanted very much to see the D-Day beaches in Normandy and, although I’d been there years before, I was fine with another visit. Then I asked if, after Normandy, she’d mind indulging me with a visit to parts of Brittany most people would not choose to explore. I had a reason: years ago, I wrote a screenplay called Wolves Live On The Wind (nice title, credit to François Villon). It was a WWII spy thriller and I’d set it in fairly remote parts of central Brittany from which my multiple characters traveled north, along a devious route from the remains of Brittany’s great forest, up to the Channel coast.

I had written it with a certain amount of guilt because my mother had once told me, “Write about what you know.” I did not know Brittany and had never been to any of the places I described. What I had done was spend six months researching the land. Had a huge Michelin map of Brittany pinned up on my wall and plotted my characters’ route as if I were managing war games.

Ruth was fine taking that route through mutual terra incognita.

was pretty wonderful, for me at least. I did all the driving, Ruth navigated. Like me, she loved maps. Once in a while when I saw something out of my window — a field full of wildflowers — I’d laugh and suggest she look up from the map, to see the vista. She’d laugh and would.

Except for the Channel and Atlantic coasts, Brittany is not a particularly desirable tourist destination. Ruth, I knew, liked to do things when traveling. Museums, churches, sights. Brittany does not offer many such destinations. A couple of very strange churches, some equally strange castles…architecturally, Brittany is not like other places. Visually, it is a stony fairy tale mixed with a touch of menace.

Below, Ruth next to teeny double bed in Kerjean, one of Brittany’s peculiar, gloomy castles. I think we were the only people there.

The great mysteries of Brittany

Brittany does have a notable attraction: monoliths, menhirs, dolmens, undatable groups of stones structured, like Stonehenge, for some unknown purpose, by no one knows whom. We were not, however, going to Carnac, the best known and most visited site.

Somehow, though, I’d learned of one great singular megalith near the coast where we’d be driving. Where had I found it? And where is it? I don’t believe I’d ever be able to find it again. My memory of getting to it is vague and sort of serendipitous.

In one or two places along the narrow road, there were funky handwritten signs on small pieces of jagged wood. Sort of “Dolmen! Turn at next right!” as if the dolmen was a peripheral feature of a farmland garage sale.

We walked through a farm field to take a look at the dolmen, which was simply sitting in the middle of a field used, probably, as forage for sheep.

But then, along a road in a small forested area, was the monolith. It came up so suddenly, I had to brake and swerve toward it.

I’ve not been able to find a photo of it.

It was perhaps twelve feet in height, and five feet wide and perhaps equally thick. It seemed to have grown from the earth beneath it. It sat on a low hill a few yards from the road’s edge. I’ve since read how someone long ago stuck a cross on top of the stone, to glue some holy Christian purpose upon this pagan thing. There was no cross when we saw it.

I don’t remember any plaque or sign for travelers to read, to learn its derivations, its history, the why of it. Really, there’s no reason for such a plaque: the stone’s origins are unknown, the people who put it up also unknown; unknown, too, is why, what the stone means. No question, though, that nature did not blow it or float it there and shove its tons to stand upright as it does. Some people did this.

When you stand near it, that essential mystery is a still aura around the stone, making it more than what I described — a huge stone — but without any way of understanding what that “more” is.

Neither Ruth nor I believe in god. Thus, nothing like anything supernatural radiated from the stone. No epiphanies to be had there.

But more than the stone itself, there was something, a power of some sort, maybe a message about the infinity of the human race, some sort of timeless human rationality that had reasoned the stone needed to be there, immortal, even if its only mortality was in the hands of the people who put it there.

Then Ruth and I drove on, to the sea.

Tweet
This entry was posted in Mysteries of Life, Scenes From My Life, The Facts of Life and tagged Brittany, Brittany monolith, Carnac, D-Day beaches, Francois Villon, Kerjean, menhirs, Normandy. Bookmark the permalink.

7 Responses to Yahrzeit for my cousin Ruth